Until gold was discovered on its shores in 1925, the town of Red Lake did not exist. The area was well known, however, by Aboriginal people and fur traders who lived and traveled along its network of interconnected waterways that extend into Manitoba and Northwestern Ontario.

When the legendary Red Lake Gold Rush began in March 1926, people from all over Canada and around the world flocked to the north to seek their fortune. Many newcomers could not speak English and had little to no knowledge of the area’s climate or geography, but, they eventually found work as labourers in the mining and bush camps, or as deckhands on boats transporting supplies to the goldfields. 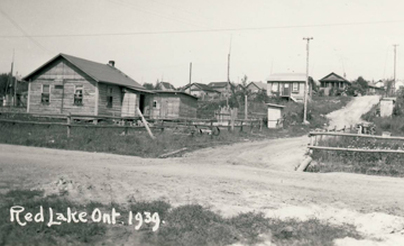 As gold discoveries continued and mines were established, distinct communities sprang up in the shadows of the mine’s head frames: Madsen, Starratt-Olsen, McKenzie Island, Cochenour, Balmertown, and Red Lake. Within these communities, pockets of immigrants settled in neighbourhoods commonly known as Finntown, Little Italy, DP Town, Little Poland, Little Germany, Little Sweden, and so on. There were also entire streets where every home was occupied by a family of different nationality. Today, these neighbourhoods are no longer distinguishable from one another.

By the mid ‘60s, the Red Lake area had become a multi-cultural hub, a community where people of many different languages, faiths, cultures and political affiliations worked and lived side by side. It was necessary for all residents to get along, no matter what their relationships had been in their homeland.

By working together, people of all kinds of cultural backgrounds, ethnicities and histories learned that they were all on common ground, and in the process came to accept one another. Their children played together, went to school together, and married one another.
This group photo was taken by Liudvik "Louis" Balciunas (Right), a Lithuanian immigrant who came to Red Lake in 1933. “Second-Hand Louis”, as he was known locally, was an experienced photographer and “jack of all trades”. He took hundreds of photographs of daily life in Red Lake and many portraits of its earliest immigrants.
Red Lake owes much of its success to these immigrants. For decades, they either toiled in the mines or built Red Lake’s small business sector, opening and running some of the first tailor shops, restaurants, laundry services, photography studios, variety stores, transportation services, and more. They also formed cultural organizations, such as the Polish Alliance and Polish Hall, to preserve their own identity and culture.

While some immigrants were only here for a short time and their families moved on to other parts of Canada, many chose to stay in the Red Lake area. Today, approximately 50% of Red Lake’s population is made up of first generation immigrants and their descendents.